The Fishing Seasons of Haida Gwaii

Beautiful Haida Gwaii is known for many things.

The undeniably stunning scenery, a decidedly relaxed way of life, the distinctive art of the Haida people, and its varied and lush wildlife. We’ve got humpback whales, bald eagles, harbour seals, and even spirit bears. But of most interest to Escott Sportfishing and our guests is—of course—the innumerable fish that populate its waters.

Haida Gwaii, formerly known as the Queen Charlotte Islands, is considered to have some of the best salmon fishing grounds in the world. Made up of over 150 islands and classed as a temperate rainforest zone, the Haida Gwaii, with its many protected bays and kelp beds, couldn’t be more welcoming to salmon, halibut, and other game fish that end up on the business end of our fishing poles. 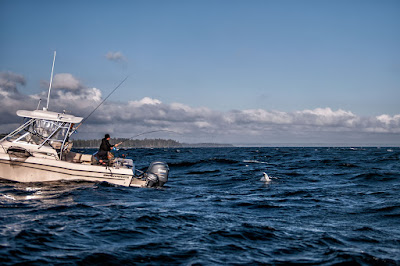 Millions of Chinook and Coho swim through the island chain on runs that take them south from Alaska to their home waters to breed. Masset, where Escott’s Haida Gwaii fishing lodge is located, essentially sits in the middle of this fish superhighway. Different species of salmon run at different times of year, with the Haida Gwaii salmon season spanning all the way from May until September.

But Tyees aren’t the only giants that swim these waters. Halibut hang about Haida Gwaii all year long, usually choosing to stay in waters much deeper than the salmon. Still, Escott’s hali fishing grounds are located only a half-hour boat ride from the Lodge, where depths plunge as deep as 275 feet.

If you book your Haida Gwaii sportfishing trip for September, there’s also opportunity to catch yet another of the prized fish that call these waters home—steelhead, otherwise known as rainbow trout.

With different species of quality sport fish swimming these waters all year round, there is no question why Haida Gwaii is known as a fisherman’s paradise.

Posted by Escott Sportfishing at 09:01