From Coho to Chinook: The Many Salmon of Haida Gwaii

Located on the West Coast of Canada, the Haida Gwaii of British Columbia have some of the best salmon fishing in the entire world. The reason the fishing is so good is because the island chain comes early on in the fish’s migration from the Arctic southward. Escott Lodge, which sits on the northern tip of Graham Island, is in the middle of all this frantic salmon activity, with the sportfishing season running from early May until the end of September.

Though they all pass along the BC coast, there are five different Pacific salmon species that inhabit the waters Escott trawls, and each salmon has its own season, behaviour, and appeal.

Chinook
The main salmon people come to come to Masset to land is the Chinook. Also known as the King salmon, the Chinook grows to the largest size of all the species—hence its royal nickname. These fish live the longest (up to 9 years) and can weigh in at over 100 lbs, although most average closer to the 20 lb mark. Anything over 30 lbs is classed as a “Tyee”—the ultimate trophy for any fishing trip. Chinooks start appearing around Haida Gwaii in early May and stick around until mid-August.

Coho
Another fish that lures anglers to the BC coast is the equally mighty Coho. It doesn’t match the Chinook in size, coming in at an average 10 to 15 lbs, but many prefer the more mild taste of Coho (a.k.a. Silver salmon) for eating fresh. Easy to identify by their hooked upper jaw, the acrobatic Coho are in season from early July until the end of September.

Chum, Sockeye, and Pink
Though Chinook and Coho are what many sport fishermen are after, the most abundant salmon in the Pacific are Pink, Chum, and Sockeye. Pink salmon are the smallest of the bunch (4 to 6 lbs) because they have the shortest lifespan, living 3 years maximum. Chum and Sockeye share the same long and thin profile, but while Sockeye average 7 lbs, Chum grow to up to 25 lbs.

No matter what salmon ends up on the end of your line, Escott Sportfishing will make sure it’s properly prepared for your table or released back into the ocean to continue on its way south. 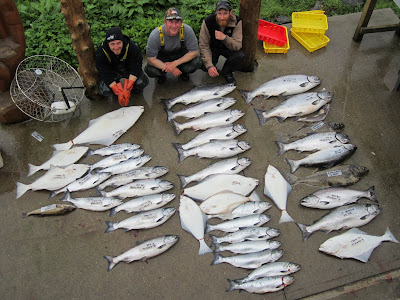 Posted by Escott Sportfishing at 15:37