How to Dress for Sport Fishing

When you come to Masset to go salmon fishing with Escott Sportfishing, you’ll be spending every day, all day, out on the water. While we provide rain gear, rain boots, a fishing hat, and a toque for each guest, you’ll need to pack the right clothes for your fishing trip.

For those who don’t already have their own “fishing wardrobe,” there are a few basic things to keep in mind.

Like your parents always told you, the key for dressing for the outdoors is layers. Although the temperatures in Haida Gwaii stay between 0°C and 20°C year round, the weather can be unpredictable. So, whether you’re fishing in the height of summer or as winter begins to creep up, layers will allow you to regulate your temperature.

Your fishing outfit should consist of three layers: a base layer, a midlayer, and your fishing bib.

The base layer is there to keep you dry. There’s no getting around sweat when you’re out fishing for the mighty Tyee, and a breathable base layer will eliminate excess moisture. If you’re fishing adventure is booked for a colder season, then this layer will also provide extra warmth. Ideally go for a synthetic and stay away from cotton or wool; although they are warm, they hold onto moisture, which just makes you colder.

The midlayer is there to keep you warm. The air trapped between the base layer and midlayer plays a major role in this, but so does the material. Stay away from jeans and other stiff materials and go for something less restrictive, like sweatpants or cargo pants. A T-shirt or fleece on top, depending on the season, is good for up top.

You’ll also want to keep your feet warm and, more importantly, dry. Wear sport-specific socks, not regular old tube socks—your toes will thank you. Another essential item is a pair of sunglasses. Polarized is best, to help cut the glare coming off the water, but above all make sure they stick on your face, otherwise they might end up overboard.

With the right clothes, you’ll make sure you can concentrate on reeling in the fish and not on being uncomfortable.
Posted by Escott Sportfishing at 16:43

Your Choice of Scenic Route: Getting to Masset from the Mainland


One of the bonuses of booking a fishing adventure with Escott Sportsfishing is the opportunity to stay on Haida Gwaii, a stunning chain of more than 150 islands along the coast of British Columbia. Escott Lodge is built upon on the shores of Delkatla Inlet in Masset, BC, established on the largest island in the Haida Gwaii: Graham Island.

A global destination for ecotourists, outdoors adventurers, and wildlife enthusiasts, Masset, Graham Island, and the rest of Haida Gwaii are home to stunning landscapes and a rich variety of wildlife—including the mighty salmon.

There are three ways to get to the village of Masset from the mainland:

1. Airplane Visitors leaving from Vancouver can fly direct to Masset Airport (which has a 5,000-foot paved runway) by charter airplane or on one of Pacific Coastal Airlines regularly scheduled flights. The airport is located 3 km from the village centre, with taxis or rental cars available. Another option is to travel from Vancouver via Air Canada to Sandspit Airport, located on the more southerly island of Moresby. Masset is about a three-hour drive north, following a 20-minute ferry ride to jump islands.

2. Floatplane For guests arriving from central BC, daily seaplane flights are available from Prince Rupert to Masset with Inland Air Charters. The hour-long flight will not only get you some spectacular views, but will conveniently land you in Masset Harbour.

3. BC Ferries For those travelling by car or wanting to take the ultimate scenic route, BC Ferries docks in Skidegate, on the southernmost part of Graham Island. There are direct routes from Prince Rupert and connectors from Port Hardy (on Vancouver Island), with both overnight and daytime sailings available. During summer, early booking is advised, as these crossings are often filled to capacity. The drive from Skidegate to Escott’s Haida Gwaii lodge at Masset is just over 100 km.

Posted by Escott Sportfishing at 11:45

You can be outfitted with the highest quality reels, the best fishing vessel, and the flashiest tackle around—but that doesn’t necessarily add up to a successful day of fishing. The surest thing to bring in a great haul of salmon? Some good old-fashioned knowhow.

Not only does catching that Tyee mean knowing when and where to look for it, but it also means knowing what fishing techniques to use for any given set of conditions. Will it be whole herring or cut-plug for bait? Or maybe a hoochie or a spoon lure is the surest bet to get a fish on the line. Then you need to ask yourself: Is it time for trolling (drawing the fishing line behind the moving boat) or is it time for mooching (slowly drifting through the water on the current)?

After nearly two decades of coastal fishing, Captain Danny Escott has an answer for all of the above—as does each one of the Escott guides, who each train extensively under Captain Escott.

Every Escott Sportfishing outing uses all the top-of-the-line stuff: Grady White boats, Abel reels, Grade A bait, the latest radar technology, and more. But it’s the skill and knowledge every expedition is led with that makes for a cutting-edge fishing experience. Being on the waters of Haida Gwaii every day means we can watch baitfish movement and salmon feeding patterns, which means we know where to go to start reeling them in, and what exactly is going to catch their eye.

When technique, tools, and knowhow combine, pulling that first Chinook into the boat or catching that first Coho with a saltwater fly is just the beginning of a great fishing trip. 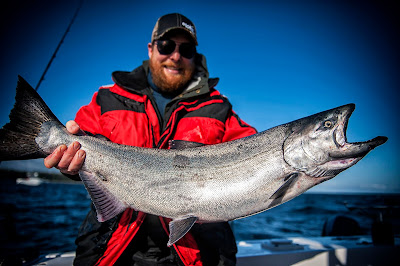 Posted by Escott Sportfishing at 11:13

From the Hook to the Cook: Fish Care You Can Trust

You and your friends are out on the boat in the waters of the Haida Gwaii, taking in all that the waters and the island have to offer. You spent the whole day laughing, enjoying each other’s company, regaling each other with stories, and most importantly, reeling in some of the best Tyee and Halibut around. The day is over, and now you have a boatload of fish that needs tending to. Don’t fret. We at Escott Sportfishing have you covered. 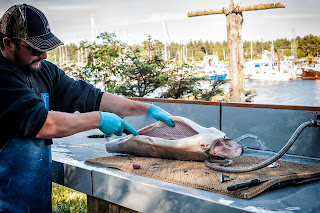 We understand that proper fish care is imperative to preserving the quality and taste of your fish. As experienced fishers ourselves, we can’t think of anything worse than your entire stock of fresh fish going rotten because you didn’t have the proper tools and space to take care of them yourself. That’s a whole day of good fishing wasted. When travelling, it’s always important to have the proper tools and facilities with or near you to clean and store your fish. Unlike most Sportfishing and Charter fishing locations along the coast or in the area, Escott Sportfishing offers full fish care services. From the deck to the dock, your fish is instantly bled, stored on ice, cleaned immediately and vac-packed or flash frozen depending on your preference. You can rest assured that once your fish is unloaded and in our capable hands, we handle it with care and prepare it thoroughly as if it were our own. 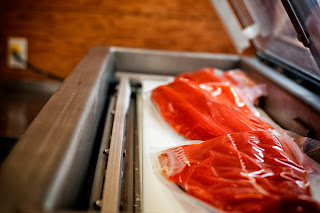 At Escott, we offer two options to prepare your fish for the journey home. Our options include Fresh Fish and Canned Fish. The first, and more popular option, fresh fish, involves a lot of cleaning techniques that are purely based on your preference so your fish is cleaned and prepared the way you like it. We can clean the fish with the head on or off and can single or butterfly fillet it as desired. We remove stomach bones, vac-pack your fish, and even provide fish coolers. Your second option would be to have your fish canned. With canning, we can smoke it before it’s canned or vac pack it. We have three options for vac-packing, which include, hot-smoked, cold- smoked, or cut into steaks. Tons of options from which you can choose!

So, after a long day of fishing, trust our professional fish care services to take care and store your fish. We want you to not just have the memories of a great trip, but also enjoy the fish that you caught during your time here at Escott Sportfishing. Pictures are great, but they don’t taste good on the grill.

Posted by Escott Sportfishing at 09:46